Quite a Character: Making Them Memorable

Here's the latest in a series of dialogues between writers — this time with short story writer and novelist Connie Keller of A Merry Heart.
CK: Something in your postcard sparked thoughts about place/setting. I've read to treat place as a character. I understand what's meant by that, but I wasn't sure how to translate it to the page for a murder mystery without slowing the pace. And, of course, I want those place/setting phrases to serve a double function within the novel to create layering.
Then it occurred to me that one way to create place and develop character is to use the different responses of the characters to place so as to define it and create contrast between characters. For example, my main character, who's new to the South, finds it confining and claustrophobic. Another character finds the heat empowering—it fuels her.

AA: You can show the response of two characters to where they live through an occasion where they are naturally together, and through dialogue and scene show how they react to where they are and each other. One obvious way to deal with setting is weather, but there are lots of nuances to southern living, especially for a transplant. Even more interesting is the prospect of a role reversal, if it's organic, where the transplant finds the weather empowering (sick of the cold) and the native finds it a downer (looking for change). The same could occur with other aspects of southern living. The transplant thinks everybody's cordial; the native finds them superficial.

CK: Yes, I think if we really want to show place as a character and still develop our characters that's the way to go. Then place becomes as contradictory and complex as a character. And we can use it to show growth and change in characters as their relationships change. I did a bit of this in the novel (in a subtle way), and I'm really excited to do more and be a bit bolder about it.

As I was thinking about editing this novel and working on the sense of place, I read something by Flannery O'Connor. She has very little pure "place" writing. There are a few "red clay soil" phrases, but not many. Mostly, she establishes a sense of place by character attitudes and writing Southern idiom, which I wouldn't attempt. But there are other techniques, like characterization, I can use to create place. Or even through action and plot. For example, what would a Southerner do/say when a "bad guy" is murdered? That gives me an opportunity to combine plot/dialogue/place (even characterization) all in one sentence.
Posted by Adele Annesi at 1:31:00 PM No comments:

Show or Tell: How Do You Know?

It's amazing how a simple conversation can spark a line of thought. That happened with friend, writer and multiple Hemingway style award-winner Jack Schmidt. He posed a writing question we all consider: Is it always better to show than tell?

The usual answer, that showing is better, is a point made so often it has lost its meaning. For clarification, here are two examples: 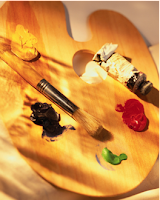 Generally, showing is better because the writer uses detail and more precise language, rendering him or her invisible and making the reader's experience more satisfying. Think of classes where the instructor used the inductive approach instead of lecturing for an hour. As in the above example, showing works best in setting scenes, creating dialogue and moving the plot along through the characters' eyes, preferably all at once.

But one great point made in a recent post is that in writing, rules are made to be broken. Telling usually works better than showing when the writer must convey a lot of information (e.g., back story) in a short amount of space. This can be done through devices like flashback, but sometimes it's best to just say Cal Jones was in prison instead of showing him there.

Ultimately, the test question is: Which technique serves the story best at that particular point?

Let me know how "show versus tell" works for you.

What’s in a Name: “Call Me Ishmael”

Can you imagine Herman Melville's Moby-Dick starting with the line, "Call me Steve?" A dear writing pal and I were talking on the phone last night during our monthly long-distance writing group, and she mentioned something quite profound. She was telling me how hard it is for her to come up with character names: "Then I found this name that when I put it into the story, I said, 'Yeah, that's it.' Then I knew who my character was." Of course, my friend knew who the character was—we were discussing the protagonist, and the first draft of the story is done. But when my friend put that particular name into the story, she not only had the satisfaction of a name that matched the character, but a character who matched the name and whom she now understood in a way she hadn't before. That kind of insight will make editing draft two a lot easier. It also gives readers an immediate sense of the person, or place, they're reading about. After all, a rose by any other name might smell as sweet, but it somehow seems better as a "rose" than "cabbage."

As promised in the New Year, we're sharing links and resources. So, here's the link that helped my friend select a great name for her main character:

If you have a trusted writing site, including your own, to share, send it to Adele Annesi. To put today's musing into action, check out the writing tip at the top of the list, and let me know how it goes.
Posted by Adele Annesi at 10:59:00 AM 3 comments:

It's January, the weather is bad or about to get bad, or worse. Your toe hurts, the cat's rubbed on everything you've just vacuumed, your in-laws are moving closer and closer and closer … You feel as much like writing as getting a root canal. But the quote for this month is right on target. Writing can drive you to distraction, yet it can be a great encouragement. One way to get back into it is to edit something. Not your entire novel, at least not in one sitting, but a scene or short story. If you haven't written in a while or if you haven't written yet today, your first thought will probably be a list of reasons not to. The best thing to do is shut your mind off, like I have to when I consider exercise. Go pull out the piece like you'd pull out your cell or your remote. Don't give it a second thought. Just get the piece up on the laptop or out of the drawer, open it and read. Pretend it's someone else's. Get out your pen or mouse and chip away, one word at a time. That's it. Well, what are you waiting for?
Posted by Adele Annesi at 12:52:00 PM No comments: