A Poetic Soul: Creativity in the Off-Hours 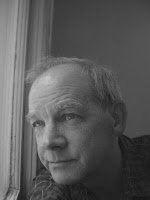 Award-winning journalist and list maker Jack Sheedy, news editor of the Catholic Transcript, finds the to-do list helpful in keeping him on the writing track, and to fire up his creative soul.
AA: So, what does a working writer and news editor do in the off-hours, especially before a holiday weekend?

JS: Last night, I decided to drag out the old charcoal grill and make myself and the cat some hamburgers. They were delicious, but I had forgotten how long it takes for charcoal briquettes to heat evenly. I was still cleaning up at 8 p.m.

AA: What about the writing side of life?

JS: Oh, I did have a to-do list that included something like “Do some writing,” but it was kind of a vague self-assignment. By the third or fourth day, it had not been crossed out, and so I searched for some old poems I had started. There was one that tried to express something about my father, something that may have something to do with his special brand of selective competitiveness. As I looked at it, I realized I may have a similar failing: a fear of accomplishing something, compensated for by a zeal for accomplishing other things. The poem is still unfinished, but here is how it stands today:

The Man Who Never Ran
By Jack Sheedy

Dad never ran.
It’s not that he moved slowly —
it wasn’t that —
I just can’t see him

in a sprint for the prize,
necktie loosened,
forehead glistening,
gray fedora lost in the wind.
Not my Dad.

Still, there was nothing slow about him.

But he never said, “Let’s race
to the willow tree” — never tried
to best me, though he could have.
I don’t even know why
this is important —
but doesn’t everyone run, sometimes at least?

Oh, once at the river I was swept downstream,
eight-year-old limbs no match for the current,
and he quickstepped to the bank,
dove in, hustled me to shore, laughed
at our “great adventure” —
then squeezed his eyes shut, lost his voice,
gripped my hand all the way home.

But that wasn’t a sprint — it was an Australian crawl.
Weeks later, at Burr Pond, I studied his strokes,
long and slow and easy,
then jumped in, flailed to stay afloat, moved
arms and legs twice as fast as he did.
It was no use.
There was no way I could keep up with him.

To see Jack in his natural habitat, visit Jack Sheedy.
Posted by Adele Annesi at 10:13:00 AM