Twist of Fate: When Your Story Takes an Unexpected Turn

Ever have a spurt of inspiration reveal a new dimension of your plot or story? It could be a brave new adventure or a step off a cliff into the abyss. Here's a second post on how to vet inspiration — for plot twists and subplots. 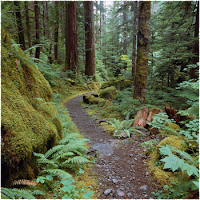 As an editor, I get queries from writers asking whether their idea for an initial plot, a plot twist or a subplot will work. I rarely say no outright, even to the most outrageous concepts. Why? Because the exercise of following inspiration — even when it doesn't lead to an idea that works for that particular story — can yield two things: writing experience and an idea for another story.
Nobody wants to spend hours, days, weeks or longer following a dead end, so it's good to reap the benefits of following a new trail without getting hopelessly lost. It's analogous to following a real-life woodland path; so are the caveats.
As is true for character-related inspiration, it's common to uncover new subplots — as well as plot threads, changes and twists — in draft two. In draft one, you're still getting to know the characters and the story they tell, so many problems will resolve by the end of the draft, or in the second. But what about those persistent problems and your idea for a twist or subplot? Disaster of disasters — you may even decide to change the plot entirely halfway through or earlier. How do you know what will work and what won't?

Many writers can follow a plot through its meanderings without an outline. Some can follow more than one. But if your story is complex — and even if it's not — you may want to record your idea in an outline or a tree diagram. It's the best way to see how the idea will "flesh out," literally. Plot shifts often arise from changes in characters. They mature faster, into different people or in different directions than you thought. Now your plot can't contain them. It's too thin, not compelling enough to fit who your people are becoming. And the more I learn, the more I believe characters drive plot, or should, rather than the reverse.

Here's an example. A woman returns to Barcelona for business and family obligations. She dreads the trip because her grandfather, with whom she was close as a child, has dementia. On the surface, the story is about the woman confronting the reality that life in the land of her youth is no longer what it was, a la You Can't Go Home Again. However, when the woman boards a train to the Mediterranean, she meets a young artist who reminds her of another creative type she met years earlier. Does she engage in conversation with this younger man and leave it at that? Probably not. Tracing her decision to have an affair, presumably to avoid the sadness of her family situation, could bring her full circle to realize she can't expect anyone to "create" life for her, that her life is her responsibility, as are her choices and their consequences. A difficult lesson, but one that makes the outcome more valuable because of the cost involved. Here, it's important to understand why the woman makes one choice instead of another, even if the writer doesn't include all the details.


And that's the key to the decision-making process — understanding your characters well enough to know why they make one choice instead of another.
Although creating a plot tree, outline or diagram can be scary — it's difficult to face the fear of your story spiraling out of control, which is what a new idea can feel like — going through the exercise will show you, literally, the consequences of your decisions in a much shorter time span, certainly than if you were to rewrite your piece for each new idea. Instead, you can diagram (a plot tree allows you to include subplots) the idea — or outline it if you need to "see" more detail — and see where it takes you.
As I write this, it's clear more needs to be said on the subject of subplots and plot twists, so I'll continue the discussion in my next post.
Resources: Plot Planner Exercise, from Writers Digest and Plot & Structure: (Techniques And Exercises For Crafting A Plot That Grips Readers From Start To Finish), by James Scott Bell
Posted by Adele Annesi at 11:14:00 AM

I have gone through your post and found some information which is quite important for me.
So, please keep it up with your these kind of posts.

its nice to read a useful article for beginner like me. Some of points from this article are very helpful for me as I haven’t considered them yet. I would like to say thank you for sharing this cool article. Bookmarked and sharing for friends.
Chevrolet W6500 Turbocharger

its nice to read a useful article for beginner like me. Some of points from this article are very helpful for me as I haven’t considered them yet. I would like to say thank you for sharing this cool article. Bookmarked and sharing for friends.
Chevrolet W6500 Turbocharger

Glad you liked the info and article - thanks for passing it along.